Encounters with the miraculous

Kristof Smeyers is a final-year PhD researcher at the University of Antwerp. He studies the resonance and the range of meanings given to religious supernatural phenomena in Britain and Ireland. You can find him tweeting about the uncanny and strange @kristof_smeyers

It was the year in which the poet and cultural historian John Addington Symonds (1840-1893) traversed the Alps and, eventually, wound up looking upon the body of a thirteenth-century miracle worker. It was the year in which she was canonised and became Saint Clare of Montefalco (1275-1308), a town in Perugia, Italy. It was 1881, and Symonds stood in the Church of the Holy Cross, face to face with soon-to-be holiness.

The six centuries between Clare’s death and Symonds’ arrival in Montefalco were shrouded in the miraculous; nearly six hundred years of post-mortem intervention and intercession, and hardly a trace of such laboriousness on her dead body. The Victorian scholar wrote about the new saint’s old face: ‘Only her hands and the exquisitely beautiful pale outline of her face (forehead, nose, mouth and chin, modelled in purest outline, as though the injury of death had never touched her) were visible. Her closed eyes seemed to sleep.’[1] Clare’s body, like that of so many divinely graced others throughout history, was incorrupt: intact, preserved and perfumed, miraculously protected from the decay that awaits all things material.

The years leading up to Clare’s canonisation in December 1881 saw a steadily growing interest in her bodily remains, in Catholic countries but also in Britain. Her body was a physical repository of the miraculous. The heart was taken out immediately upon her death and found to contain depictions of the Crucifixion (image 1), and was given a prominent place for veneration in the Augustinian church. Her blood, drawn from the wounds of her stigmata, was liquefying, boiling, and bubbling since the fifteenth century. In 1881, her body was still preserved to a degree that was considered supernatural. Symonds’ journey to Montefalco was not primarily driven by a desire to see Clare’s incorrupt body; as a Renaissance scholar he wanted to see the frescoes that depicted angels, saints, and miracles. Italy’s landscape was in the imagination of many Victorians infused with a wondrous form of Catholicism that had, at least according to a mostly English cultural mainstream, mostly evaporated from Britain. That development was welcomed as a step to modernity, but came with a tinge of regret and loss – a disenchantment. 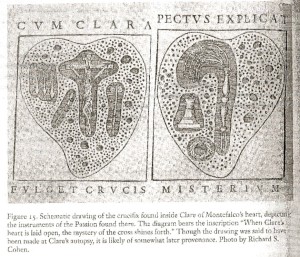 The Continent was, in such modernisation narratives, often presented as still steeped in religious supernaturalism. Those who could afford to searched their miracles abroad, and supernaturally graced bodies in particular drew crowds of those who sought enchantment in some way or other. In the 1870s, dozens of British travellers crossed the Channel and visited the house of the Belgian living saint Louise Lateau, who bore the wounds of Christ on her own body on Fridays. But Italy most of all spoke to British imaginations of the miraculous, conjuring up a landscape of pious processions and deep devotions that was familiar from decades of Grand Tour publications. In the early 1840s, English recusants hiked up the Alps into the Tyrol, where fabled living saints with a worldwide reputation of holiness exhibited stigmata and ecstasies to international audiences. In such pockets, vibrant so-called ‘premodern’ religion could still be witnessed. Its miraculous manifestations fuelled imaginaries and cemented ideologies of British (Protestant) modernisation.

They also tied Catholic miracles to an idealised, primordial vision of continental Europe. If miracles existed outside of time, for many Victorians they definitely existed outside of their time. Symonds’ encounter with St Clare was a bridge between two ages, where a Victorian romantic sensibility met ‘medieval piety’. Upon their arrival, Symonds and his fellow traveller Christian Buol were asked by a little boy outside the Clare’s church ‘whether we should not like to view the body of the saint. This privilege could be purchased at the price of a small fee’.[2] The company was led behind the altar, into a small and appropriately darkened chamber where a man slid open the doors of a curtained coffin-like structure: ‘Before us in the dim light there lay a woman covered with a black nun’s dress.’ The experience was not unfamiliar to Symonds’ readers: the encounter with the body of St Clare followed the pattern of similar encounters with an exotic, because exoticised, Catholicism. ‘I have rarely seen anything which surprised and touched me more,’ Symonds wrote of the saintly sight, filling in an arcadian tableau of Italianate Catholicism: ‘[t]he religious earnestness of the young custode, the hushed adoration of the country-folk who had silently assembled round us’, the shrine filled with relics (among which the heart, suspended).’[3] 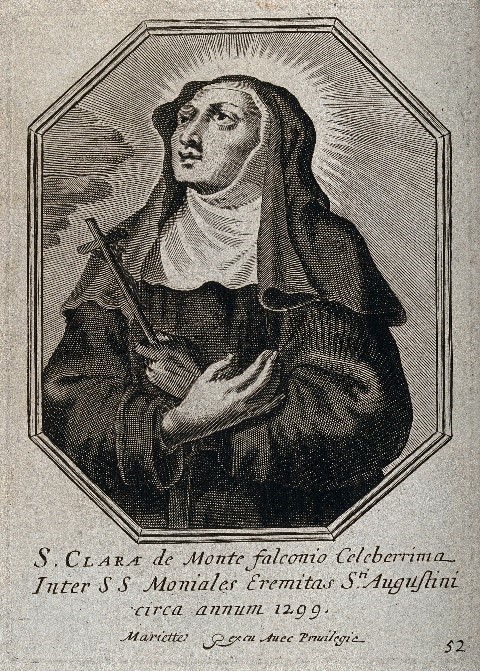 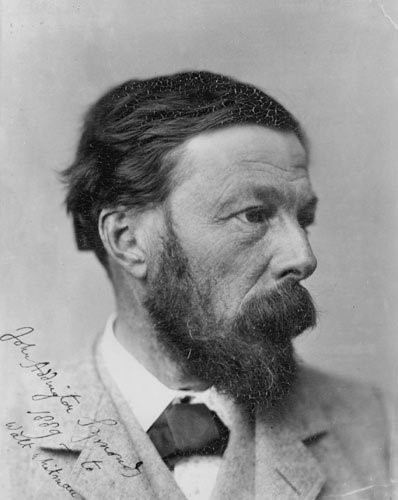 Accounts of cultural encounters with the miraculous abroad strengthened the impression that such tableaus were one of the fundamental differences between Victorian Britain and the lands across the Channel, characterised by a flair for the supernatural and miraculous, sometimes dismissively labelled in Symonds’ time as ‘folk religion’, with ‘the gentle piety of the men and women […] expressions of incredulity’.[4] But this distancing created a fascinating other, which compelled people at home. Clare did not easily let go of Symonds. ‘I have often asked myself,’ he wrote, ‘who, then, was this nun? … And I think now of this girl as of a damsel of romance, a Sleeping Beauty in the wood of time, secluded from intrusive elements of fact, and folded in the love and faith of her own simple worshippers.’

The miraculous nature of the liquefying blood, the stigmatic cruor of the heart, and the incorruptible skin led many more Brits to Montefalco’s church in the wake of Clare’s canonisation; they blurred the boundaries of the measurable, and pushed those of the imaginable. Despite persistent efforts of writing Victorians throughout the nineteenth century to depict Catholic miracles and devotions as temporally and geographically other, similar phenomena were found closer to home. As Symonds stood face to face with the stigmatised body of St Clare, mystics such as the stigmatised schoolteacher Teresa Helena Higginson (1844-1905) bore miracles on their bodies for others to accept, reject, or doubt as signs of living, thriving Christianity. Modern Britain, too, was home to the miraculous.

Katharine Park, ‘Relics of a fertile heart: the “autopsy” of Clare of Montefalco’, in The material culture of sex, procreation, and marriage in premodern Europe (New York: Palgrave, 2002), pp. 115-133.

This post has been re-published by permission from the BAVS Postgraduates Blog. Please see the original post at https://victorianist.wordpress.com/2020/01/06/encounters-with-the-miraculous/